All right people, things are getting serious!  I have to say that this is my favorite episode so far because not only did the characters that I love get to shine, but the one I really, really hate finally got what he had coming to him!  So let’s get to the good parts, shall we?

The first major highlight of this episode was Tyrion at the Eyrie.  If you remember from the last episode, Catelyn brought him to her sister’s lands instead of Winterfell to answer for his crimes.  Smart move  because his brother Jaime and his crew wouldn’t even think to look for them there.  Sitting in a jail cell forged in the side of the mountain where there is only a sloped edge between you and the quazillion foot drop below, Tyrion thinks fast!  His coaxes Mord, the guard keeping him, to send a message to Lysa Arryn that he wants to confess his crimes.  Now we all know Tyrion isn’t quick to fess up to anything so I’m wondering what he has up his sleeve.  He is granted an audience with not only Lysa but with all of the Lords and Ladies of court, Lord Robert (which I think there is something seriously wrong with that little boy) as well as Catelyn.  He stands before them and start confessing his crimes – like stealing the robe from a servant girl while she was bathing when he was 7 and putting goat poo in his brothers boots.  He gets the crowd laughing and Lysa is clearly pissed because at the end, he tells her he knows nothing about the murder attempt on Bran nor the death of her husband, the former hand of the King.  But his cunning doesn’t stop there – he demands a trial.  Lysa’s idea of a trial is having her weirdo boy listen to his story and declare judgment.  His idea is a trial by combat and by law, Lysa has to agree.  So we all are thinking that the Imp is a little crazy because he clearly can’t fight anyone.  But alas, he is a smart one and when Lysa chooses a Knight to fight for her, Tyrion gets his travel buddy to take up arms.  Long story short, his buddy wins and Tyrion is a free man. 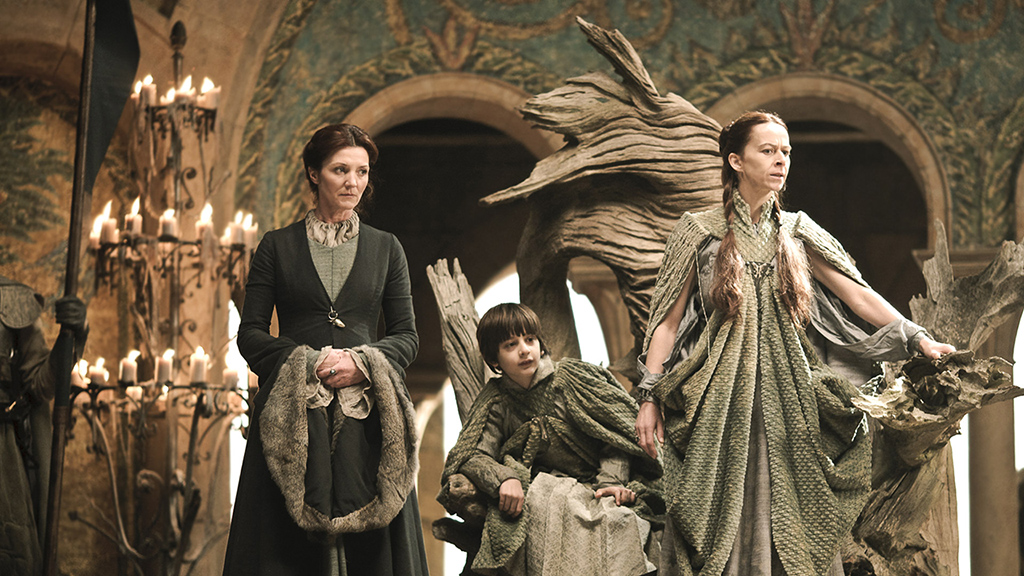 The second highlight of this show was with Daenerys and the Dothraki.  We get a quick scene after Ned wakes up from his injury with her and one of the dragon’s eggs.  She puts on top of a fire and just as she is taking it out with her bare hands, her servant walks in and quickly grabs it from her, fearing she has burned herself.  The servant’s hands were burned but Dany’s hands weren’t.  I saw that was kinda weird.  Then we see the ceremony where she has to get eat a horses heart (raw no less!) during a ritual that has to do with her pregnancy.  She eats that thing like a champ in front of her husband and his clan.  You can tell she has earned their respect and she proudly announces the name that she will give their son in Dothraki.  My girl is finally coming into her own as a khaleesi and the only who isn’t happy Viserys.  He sees that not only is he losing his hold on his sister, he is really jealous that his sister is getting that royal type of respect and he isn’t.  We jump to the last scene where the clan is having dinner and Viserys comes barging in, sword in hand looking for his sister.  Mind you, they are in a sacred Dothraki city where weapons are forbidden, but you know this fool doesn’t care.  With the sword at his sister’s belly, he gives Khal an ultimatum – give him the army and win his golden crown or he will take his sister back, after he cuts the baby out.  Khal says something in Dothraki and Daenerys says that her husband will give him what he promised, giving him a crown that will make people tremble at his feet.  Just from the look on her face I knew that wasn’t what he said and soon I was right.  Khal people grab  him twisting his arm and he is given the gold crown he deserves – a pot of hot, molten gold poured straight on his head!!  Score!! I’m telling you this show has the best endings!

And oh, the plot in Kings Landing thickens!  Ned is going through the Baratheon family line, noticing that all the men born in Robert’s family had black hair. We get to Jory however and that little sorry excuse for a prince is a blond.  Is this the love child of Cersei and her twin??!  That’s a secret that is definitely worth killing for!

Spill it!  What did you think of this episode?